Rowing is one of the oldest organized human competitions.

Yet it is not something that most Americans watch or think about. The popularity of baseball, football, and basketball erased the notion of competitive rowing as an everyday team sport.

Still, there is something very unique and special about rowing. It is simply more grueling and punishing than of the other organized sports. And for some reason, humans are drawn to things that suck. The harder it is, the more people stand in awe of those that partake.

The harder it is, the more alluring its appeal.

Those people that are drawn to the sport of rowing are highly disciplined, nitty-gritty types. They lavish in the delight of long, painstaking and repetitive work that comes with rowing. 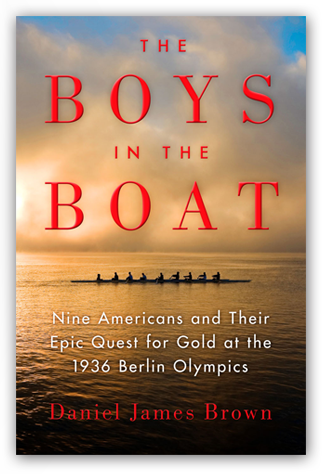 There is no wonder that this sport was initially only reserved for those that went to prestigious Ivy League schools. It was considered a privilege to test one’s grit in the perils of rowing.

But those rules were, of course, meant to be broken.

The story of the Boys in the Boat is one that breaks the rules. A group of castoffs and nobodies thrive in a sport that was not really meant for them.

Yet they prevailed and in the highest fashion. Olympic Gold.

They beat their rivals from UC Berkeley, the best of all Ivy Leagues at the time. They competed in a US Championship and came back from a massive deficit to best the rest of America en route to Berlin in 1936.

They went to Germany and dismantled Hitler’s superior race team, despite being handicapped with the sickness of one of their best rowers.

When they began this incredible run, they were just sons of loggers and farmers, mill workers, and factory hands. In fact, the story is partially based on a character named Joe Rantz, and how he was abandoned by his family on two different occasions.

These sons of the white-collared won gold despite all of these massive disadvantages. However, like many things in life, these disadvantages were the vital link for eventual success.

AGAINST THE ODDS: THE ROAD TO OLYMPIC GOLD

The trick would be to find which few of them had the potential for raw power, the nearly superhuman stamina, the indomitable willpower and the intellectual capacity necessary to master the details of technique (for rowing).

♦ The boys enjoyed the process. To become Olympic Champions, they had to row almost every day and often under grueling circumstances. They took pride in fine-tuning their craft. Hour after hour, year after year, they rowed and worked. This is the behind the scenes part that we often do not see of Olympic Champions.

♦ They paid attention to the details. They didn’t eat crappy food. Their technique was constantly being fine-tuned. They made continual, small improvements over time. I didn’t note the exact number of times I read it but it seemed like the boys broke a record every year that they rowed at the University of Washington. It seemed like they were the best “Freshmen” team to ever have rowed. Then they were that “Sophomore” team that was unstoppable. And ultimately, that Husky team with the potential to win it all. Constant improvement of little details.

♦ They embraced failure and change. Over the course of their time at the university, they went through all kinds of ups and downs, including the back end of the Great Depression. During the course of a season, they embraced the grind that came with the punishing sport on a daily basis. Even at the micro-level, over the course of one race, momentum can change at a moments notice, yet the individual rower must still continue to pull with everything they got. Even as they feel the hopelessness that comes with a losing effort. They must continue to pull. They have to keep moving forward because there is no other option.

♦ They cherished the proving ground of competition. Despite all of their gifts and talents and insane amounts of hard work, none of it would have mattered if they didn’t go out and prove themselves over and over again during competition. They embraced this piece of the puzzle. Achievement is oftentimes, the only thing that matters in the end.

♦ They were a team. Egos can be a champion killer. We see it happen almost every year in professional sports.

… And the ability to disregard his own ambitions to throw his ego over the gunwales, to leave it swirling in the wake of his shell, and to pull, not just for himself, not just for glory, but for the other boys in the boat.

A group of talented individuals that perform as a team is incredibly powerful. Infinitely more powerful than another group that is more talented and even more gifted physically.

The idea of an integrated team in full ‘swing’ is even more amplified in a sport like competitive rowing. It takes longer and is much harder to get everyone on the same page, rowing in unison, for long distances, under diverse weather conditions, in extremely stressful situations.

That was the ultimate advantage of the group of nine American boys from the backcountry of Washington State. As I visualized the setting in Berlin, I couldn’t help but imagine how much of an advantage this must have been for the American team. Other teams, roughly assembled of a country’s mightiest rowers, yet obviously lacking the kind of camaraderie that makes a team great.

PS- Boys had me hooked early on. Follow this link for a copy on Amazon.

5 Ways to Master the Game
We are What We Choose by Jeff Bezos
The Iron by Henry Rollins
Conor McGregor: The Mindset of an Irish Monster