In 1865, just over a century before Atkins published the now famous Atkins Diet, a man named William Banting sent out a periodical to the people of London addressing his fight against obesity.

Banting, not unlike the countless of people in today’s society, struggled over and over again to rid himself of his excess weight. Referred to as a “parasite” in his letter, his efforts yielded practically no results.

Sparing no expense in consultations with the foremost experts of his time, he reported to have tried:

Similar to a preponderance of exercisers today, he also enrolled in a vigorous workout routine. At the advice of an eminent surgeon, he took up a couple hours of rowing every morning. Unfortunately, this rigorous routine incited such an voracious appetite that he ate so much afterwards and ended up gaining more weight.

The subsequent advice from this eminent surgeon?

To credit Banting, he remained undeterred and kept at it. Eventually, luck would strike and Banting would stumble upon an advisor that provided a sensible approach that led to a loss of 38 lbs.

The advice that quickly improved Banting’s way of life and loss of weight was to limit his carbohydrate consumption.

More specifically he was told to abstain from bread, butter, milk, sugar, beer, and potatoes — all staples of his diet at the time. Banting even remarked that he had particular fondness of bread and most certainly enjoyed it throughout the day as a companion to tea (common for the time and place).

These said my excellent adviser, contain starch and saccharine matter, tending to create fat, and should be avoided altogether.

Banting went from a diet rich in bread and milk, sugar and beer to one rich in meat and fat. He still enjoyed a few glasses of wine every day and a piece of dried toast, but for the most part eliminated carbohydrates.

Here is how Banting described his new diet:

For breakfast, I take four of five ounces of beef, mutton, kidneys, broiled fish, bacon, or cold meat of any kind except pork; a large cup of tea (without milk or sugar), a little biscuit, or one ounce of dry toast.

For dinner, five or six ounces of any fish except salmon, any meat except pork, any vegetable except potato, one ounce of dry toast, fruit out of a pudding, any kind of poultry or game, and two or three  glasses of good claret, sherry, or madeira- Champagne, Port and Beer forbidden.

For tea, two or three ounces of fruit, a rusk or two, and a cup of tea without milk or sugar.

For supper, three or four ounces of meat or fish similar to dinner, with a glass or two of claret.

For nightcap, if required, a tumbler of grog- (gin, whisky or brandy, without sugar)- or a glass or two of claret or sherry.

In modern times, it would seem that he was drinking a lot of “claret, sherry, or madeira,” but in the 1800s, this was just par for the course.

Following his new diet recommendations, Banting started to experience an improved quality of life. He reports being able to walk forward down stairs, as opposed to backwards to help reduce tension on his lower body. After years of consistent weight gain, the weight started to come off. His sight was restored and his hearing improved — his past ailments a matter of history.

All this from something we have heard over and over again, limit the amount of carbohydrates you consume!

Not sure exactly what that means or how to do that? 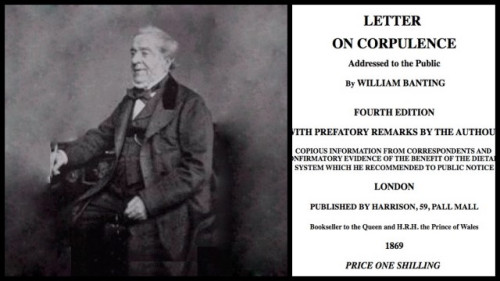 The following is an extract taken from Harper’s Weekly review in response to Banting’s letter.

DIETARY FOR THE CORPULENT AND THOSE WHO ARE INCLINED TO BE SO.

The Lean of Butchers’ Meat.

Sugar in any form.

Fruits of all kinds, fresh or preserved.

Tea and Coffee, without sugar or cream.

Stout- Porter and Ale of all kinds- Milk- Sweet and Port Wines- Liquers- Cocoa and Chocolate.

This entire post was meant to highlight the struggles of weight and excess fat are not a recent issue. A century ago, William Banting was just as overweight and frustrated as the modern man. Faced with what seemed like a lot of options for his time, he could have easily given up after years of failed effort.

He was by no means a slouch either, having just retired from a 50 year career as an active businessman.

As was the case a 100 years ago, activity is not the culprit. It is the overconsumption of carbohydrates as the fat inducer.

The case against carbohydrates is even more urgent today, with the macronutrient showing up everywhere and in everything.

In order to rid oneself of this “parasite,” according to Banting, we must remain steadfast in our commitment to cutting carbs and vigilant in our quest to consume more protein.

Stay focused and don’t let up, as I can wholeheartedly guarantee, this is no easy process. The pamphlet by Banting, the book by Atkins, and the keto crazes, protein powers, sugar busters, and carnivore eaters are going to keep popping up every few years until another 100 years as passed, with the obese still in search of that magic system that will keep them from over eating.

Let me save you a couple eons or so, there is no magic system.

The only thing that works is consistent pressure. Intensity. And a unrelenting commitment to getting better every day.

You are not alone, there are coaches out there to help guide you.

Among them, I stand as forward thinker and backward looker, as the past becomes the present, the future is all that matters.