Note: My first post here discusses how the Outwork Book Club works. The home page for the book club is here, with archives, previous books discussed, and additional book recommendations.

THE MAGIC OF THINKING BIG

This book comes to as the number one book recommendation from Tim Ferris. As the author of the 4-Hour Work Week, other bestsellers, and host of my favorite podcast, it should be expected that I would take the time to read and fully dissect this book.

Thus far, it is everything that I could have expected (plus more). The underlying premise is simple success. Acquire the secrets of success… Achieve everything you’ve always wanted.

How? By making successful action a habit.

The act of doing to get into the habit of achievement. The power of believing that you can accomplish more.  The magic is actually in how we go about doing everyday things. It is about our perspective of daily interactions and how we use our thoughts to provoke successful action.

The importance of thought management is a critical message throughout the book:

It’s fun to feel yourself growing more confident, more effective,more successful day-by-day, month-by-month. Nothing- absolutely nothing- in this life gives you more satisfaction than knowing you’re on the road to success and achievement. And nothing stands a bigger challenge than making the most of yourself.

Believe you can succeed and you will.

All forms of success starts with belief. You simply cannot go through the motions and succeed. You have to believe that you will get it done before it happens. It is a simple and fundamental rule, but so many people truly do no understand the power of belief.

This book was first published in 1959 but there is no truer statement. Success means winning.

Success means winning admiration, leadership, being looked up to by people in your business and social life. Success means freedom: freedom from worries, fears, frustrations, and failure. Success means self-respect, continually finding more real happiness and satisfaction from life, being able to do more for those who depend on you.

And success starts with belief.

He said to them, “Because of your little faith. For truly, I say to you, if you have faith like a grain of mustard seed, you will say to this mountain, ‘Move from here to there,’ and it will move, and nothing will be impossible for you.” – Matthew 17:20

With a strong sense of belief, you will trigger in your mind a chain of reaction of positive thoughts. The law of attraction is very clear on what happens next: like attracts like.

Your mind and body will start to move towards the direction of whatever it is you want to accomplish. Forward momentum is hard to stop once it gets moving.

Your strong belief in yourself will also make other people believe in your abilities. Other people will place their confidence in you. This is why charismatic leaders are so influential, they often build within themselves and unshakable sense of belief in their abilities and their vision.

HOW TO DEVELOP THE POWER OF A BELIEF

Your mind is a thought factory.

Whatever you put into your mind is what your mind will become.

The power of belief is all about cultivating a mindset that is focused on success and only on what it takes to build that success. Put into your mind nothing else.

1. Think success, not failure. When you compete, when you strive to succeed at something, think “I’m equal to the best,” think “I will win,” always let the master thought, “I will succeed” dominate your thinking process.

2. Remind yourself that you are better than you think. Too many people think negatively of themselves and they end up settling with mediocrity because that is what they feel they deserve. Successful people are just ordinary people that have developed a belief in themselves and what they can do. Success and achievement require many things but it does not require superior intellect, money, genetics, or a natural ability to grasp certain things. It requires belief and work. Do not ever sell yourself short on what you want to do or accomplish.

Plan for Self-Development and Growth

You should have a plan for self-development and growth and that plan must do three things:

The plan must be able to tell you what to do. Nowadays many people love to speculate on what to do to get results. A good plan must remove a lot of that speculation and only include the most important and pertinent information; it must have solid content that is proven to work.

For success, we can use the attitudes and techniques of other successful people: How do they manage themselves? How do they overcome obstacles? What sets them apart from ordinary people? How do they think?

2. It must supply a method.

The method is the how-to-do-it part of the plan. This part of the process reminds me of a quote, “If information is all that mattered, everyone would be a billionaire with a six-pack.”

Information is no longer the most relevant piece of the puzzle. Everyone, in general, as an idea of what to do. There are coaches and experts for everything. The hard part is the method and the ability to follow that method. We can constantly look at successful people for guidance. We can read books.

We can study the process of billionaires and extract specific methods for success. Charlie Munger is the millionaire partner of Warren Buffet and his “mental models” are summarized in Poor Charlie’s Almanack: The Wit and Wisdom of Charles T. Munger.

Your self-development program must be able to deliver to you a series of rewards. These rewards can be anything but it must matter to you in a way that extends beyond the surface level. For example, a reward of deep respect and admiration from your friends and family will matter more than a new car.

Results are often fickle, so an effective program must deliver rewards that are meaningful and deep. Make it matter. Life in itself is fleeting, chase rewards that significantly alter the course of this fleeting experience.

EXCUSES: THE DISEASE OF FAILURES

How often do we ever think, “If only I woke up earlier and trained harder, then maybe  would have received the desired result that I was expecting?”

The answer is never.

Schwartz likes to talk about the study of people. He notes that if you study people, you will notice that unsuccessful people suffer from a mind-deadening thought disease called excusitis. Average people suffer from at least a mild form of it and the more successful an individual is, the less inclined that person is to excuse-making. But the mediocre person that has gone nowhere usually has a bookful of reasons to explain why.

Here are the four most common forms of excusitis and how to beat it, according to Schwartz:

1. My health isn’t good. Be genuinely grateful for the health that you do have and refuse to talk about any potential problems. Refuse to acknowledge any shortcomings or any ailments and abide by the mantra, “It’s better to wear out than rust out.”

2. I’m not smart enough. Being insanely “intelligent” isn’t as important as using the intelligence that you do have. It is all about taking action and nothing is more common in today’s workforce than uberly talented, smart, and lazy individuals. 95% of ability is stickability. Keeping at it, failing and working over and over again is much more vital to success, and success is the only thing that actually matters. IQ does not matter. Your alma mater does not matter. Your level of success matters.

Be a Human Engineer. Be a person that is perpetually positive. If you have the right attitude, you will always be in a better position than someone with a higher IQ who is less positive, or one that lacks imaginations, or one that is unwilling to work hard for the right reasons. Remind yourself several times daily, “My attitudes are more important than my intelligence.”

3. I’m too old (or too young). Age is not as important as ability and output. Most people forget the fact that we, as humans, have about 50 years of productive work time (20-70 years old). We often place too much emphasis on the first 20 years, using that time solely to establish “who we are” or by choosing the profession that we will continue to pursue. But how about the other 30 years? Why aren’t those years just as important? Because no one ever makes them as important. If you change your life’s course at 40, you still have 30 years of productive, meaningful work left. Make it count.

4. I attract bad luck. There is a cause for everything. Nothing happens without a cause. Accept the law of cause and effect and don’t be a wishful thinker. Success comes from doing things and mastering the principles that produce success. It doesn’t come from thinking about it and it doesn’t come from good luck or from heavenly good graces. Remember, luck favors the bold.

In order to conquer fear, you must build confidence.

Confidence is acquired by everyone. No one is born with confidence. It is not inherent. It is trained and it is earned.

In order to conquer fear, abide by the action principle.

When we face tough problems, we stay mired in the mud until we take action. Hope is a start. But hope needs action to win victories.

Whenever you encounter the resistance, or you feel the growing anticipation of fear, or hesitate, steady yourself and take action. 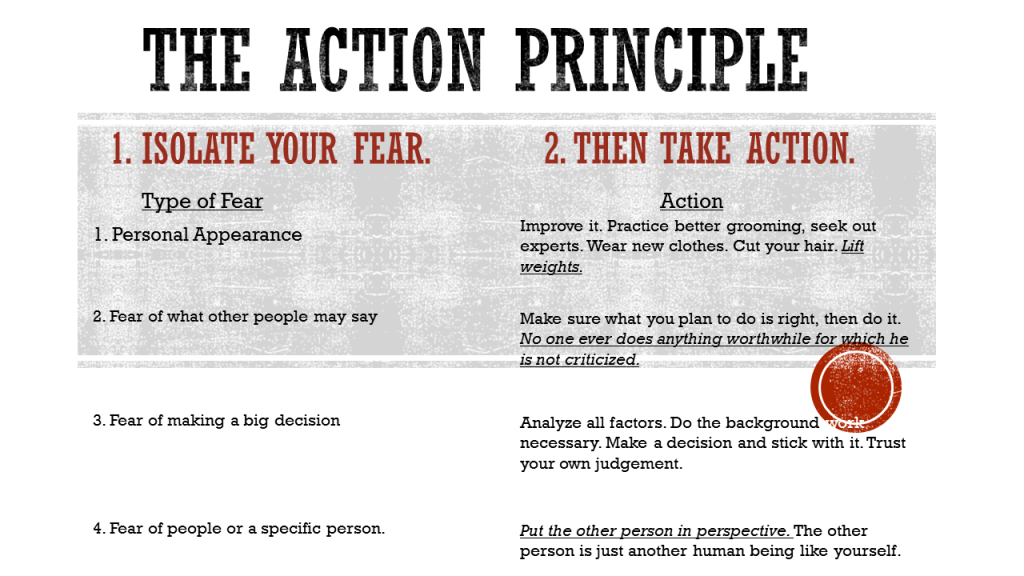 After reading this book, I can feel the power of thinking big.

The connection between your body and mind is so complex. Not all is yet known about the exact complexity but we do know for sure, through scientific anecdotes and through simple observation, that you can control the relationship between how you think, feel, and act.

It isn’t what one has that’s important. Rather it is how much one is planning to get that counts.

Outwork Book Club: The Millionaire Fastlane
Quiet Professional by Rob Shaul
10 Books Every Intern Should Read
We are What We Choose by Jeff Bezos