Note: Read my first post here for details on how the Outwork Book Club works. The homepage can be found here, with archives and previous books discussed.

The idea of becoming a millionaire is important.

A million dollars represents much more than that. It is the gold standard for success in our country. It is a lofty goal that takes years of hard work and dedication to achieve. The road to achieve it will be littered with failure, self-doubt, naysayers, and failure (again).

I idea of becoming a millionaire is important because of what it takes to get there.

The Outwork Book Club will be exploring the most recommended business book for entrepreneur’s on the internet today.

Get out of the Slow Lane and into the Fast Lane towards that elusive million dollars.

Becoming a millionaire requires risk- it’s hard to do.

It takes time and hard work but the payoff is substantially better. It equates to having wealth at a young age when you have the physical capacity to enjoy that wealth.

Cruising the streets in a Lamborghini is less exciting when your 60. At that age, it is probably a hassle to be driving around a contraption so loud and fast!

MJ Demarco talks about three different roadmaps a person can take in their life:

Only one of the above roadmaps will make you rich at a young enough age to enjoy it. It is a process and not a get rich scheme. It involves a rich mindset and not a poor mindset. It doesn’t rely on other people or external factors. The Millionaire’s Fastlane doesn’t care about things like business plans, fancy degrees, your environment, your gender, your whatever. It only requires that you stick to the process and you make the commitment to a better roadmap.

Wealth is a formula, not an ingredient. “The Fastlane process demands sacrifices that few make, to resolve to live like few can.”

The Sidewalk is characterized by hope. Hoping that someday you will get “lucky” and will win the lottery. Or maybe get hit by a car driven by a rich person. Sue, sue, and sue. Finally, you have received what is rightfully yours, without any work or effort or any slight semblance of a plan.

Sidewalkers are often lost. They work paycheck to paycheck and blow it all on either instant gratification or a get rich scheme. Or a get fit quick scheme. They always look for something quick.

From DeMarco, “short-term feel-good is often long-term bad. Instant gratification is a populous plague and its predominant side effects are easily spotted: debt and obesity.

In more direct terms, sidewalkers are characterized by their poorness and fatness. Look around you, this is most of society.

The Slowlane is perplexing. It is probably a good solution for most people and most people are content to subscribe to its promise.

BUT is not always guaranteed and even more importantly, the reward for persistence and hope is not that great. What is the point of being rich when you are too old to fully enjoy it? It is based on the idea of having a pot of money to rely on in your old age. It kind of makes sense but it is called the slowlane for a reason.

DeMarco lists 12 distinctions between slowlane and fastlane millionaires that magnify these limitations.

You can break the Slowlane equation by increasing your value to society. When you have more value, then you can demand more money.

Talent and skill are the guideposts to the Fastlane. Acquiring these traits become your responsibility.

Responsibility is the price of greatness. – Winston Churchill

The purpose of this book is crack the code to wealth and live rich for a lifetime.

Rather than distilling a few proven methods or “ways” to go about achieving the Fastlane, he instead spends several different chapters talking about what it looks like. They aren’t exactly transparent; which is frustrating considering that this book has a theme (cars on roads) and likes to use lists and matrices. You would think the bottom line would be easier to perceive. 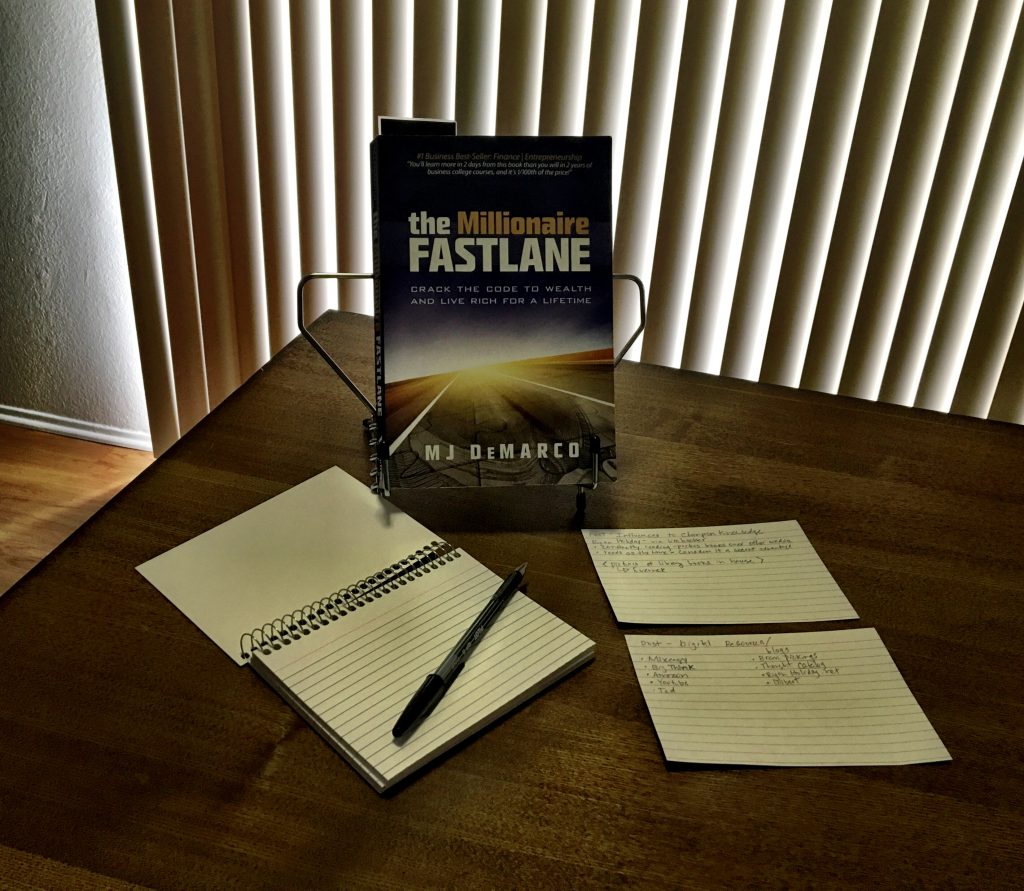 And because of this, it took me longer than usual to finish the book and to recount its most useful principles. I used marginalia to capture some of its key insights and then transferred them onto note cards.

From there, I sifted through what I perceived to have the most value:

♦  The business and lifestyle strategy of the Fastlane is built within an optimal environment for rapid wealth creation and unconventional lifestyles, rooted in these four segments; (1) Controllable Unlimited Leverage (CUL), which is maximum control and leverage of a business or system; (2) Business, think Me, Inc; (3) Lifestyle, it is all-encompassing, and includes the convergence of beliefs, processes, and actions; (4) Rapid Wealth Creation, acquiring large sums of money, consistently and quickly (not 40 years of saving).

♦  Be a producer, not a consumer. You need to create value and give the world something it needs (or wants). Selling something to a million people and you will become a millionaire. It needs to have leverage: a new set of wealth variables that are unlimited and controllable. 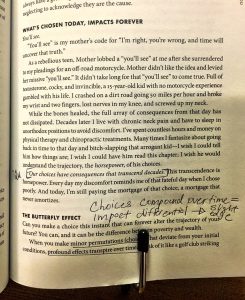 ♦ The leading cause of poorness is poor choices. Choice is the most powerful control you have and when you make lots of small, positive choices, it compounds over time. The choices you make have a significant impact on your future, positive or negative. This message sounds awfully similar to the slight edge.

♦  Time is King. The ultimate form of abundance is time; free time to do as you please. Avoid the lure of unnecessary luxuries and parasitic debt; this will ensure you have to work for money. The demands of these unnecessary needs will force you to make lifestyle sacrifices to accommodate them. For example, if you by a luxury car before you have built the necessary money producing systems, then you will be forced to work a conventional job to pay for it.

♦ Education is free for your consumption. You have to actively seek out the education necessary to live in the Fastlane and to be a producer. Conventional thinking will only produce conventional results. Infinite knowledge is at your fingertips but you have to go out there and get it; turn off the TV, quit playing video games, and hit the books. DeMarco started his journey in the library but you can start anywhere, like here. The acquisition and application of knowledge will make you rich.

You can become an expert in any discipline not requiring physical skills. – MJ DeMarco

♦ Understand the Five Fastlane Commandments. They are simple rules to consider when looking to build a business, which is the catalyst for the Fastlane model. No business= no Fastlane.

♦ Grandiose, life-changing ideas are rare (and unnecessary). Opportunity is simply a solution to an inconvenience and that inconvenience is oftentimes just doing something better than the competition. Enter an established market, then outperform everyone else.

♦ In order to outperform the competition, you must be able to execute. Execution is King. Lots of people have lots of ideas; they are simply everywhere. The ability to take action and execute is what sets apart those that are successful and those that settle for the status quo. Business plans are ideas on steroids; they need to be tied to execution.

♦ Marketing is your most powerful tool. Marketing is a game of perceptions, and whatever the perception is, that’s the reality. For entrepreneurs, achieving a product/market fit is the only thing that matters.

♦ Focus on one thing at a time. Become a master at the one thing and then make lots of money off of it. Once you become an accomplished producer than you can start doing other things. Dabbling in too many things at once will damage your ability to focus and build one thing.

Overall, this book is filled with lots of good bits of information, although it is not organized in the most conducive way for a reader to learn and apply its principles. It has a theme that makes sense and helps to convey its overall message, but at times, it is overbearing and some things don’t fit nicely into the theme.

Still, this book is valuable for its message. It is unconventional and many people will benefit from hearing about life in the Slowlane and the misguided promises it purports.

A 9-5 for 30 years, with limited control and a lack of passion, is not the American dream; it is nobody’s dream and it needs to be addressed as the trap that it is.

Get your copy of The Millionaire Fastlane here.