I recently drove from Texas to California and I needed a good book to listen to. During long road trips, I like to listen to stories that will inspire me to become better a person in some way. For this particular journey, I chose to listen to the Empire of the Summer Moon. It was broadly about the Comanche Indian Warrior but it also did a good job illuminating the fight for Texas and how the expansion westward ultimately led to the demise of Native America’s most powerful fighting force. 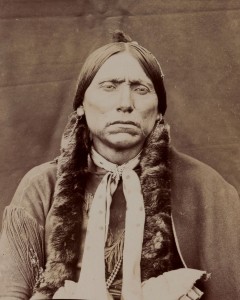 The Comanche’s were the most fearsome warriors to have roamed North America.

They ruled the great plains of Texas for three centuries and were known for their fighting skills and sheer ruthlessness. They were equally deadly to both neighboring Indian tribes and the white men that encroached their land.

While other Indian tribes succumbed to the rising interest of the white settlers, it would take a deliberate effort from the U.S.  Army to dethrone the Comanche tribe. Not only was their annihilation purposeful, the battle-hardened American Army of the civil war knew that the Comanche’s were a different breed. The Army would eventually be forced to adapt their tactics in order to combat them directly since doing otherwise was a reoccurring lesson in defeat.

The Comanche’s were the finest horseman of the time, even rivaling the Mongols as history’s greatest mounted fighters. They gained this advantage by being the first Indian tribe to adopt the horse as its main fighting vehicle. They would learn to control several mounts at a time and raised their warriors to fight while in motion. This included a move where they would fall to one side and use the horse as a shield while they fired arrows from underneath its head and body. They were said to be able to empty their quiver of 20 arrows in under a minute. These abilities combined with a culture built around the exploits of battle produced a deadly combination.

Empire of the Summer Moon had a sub-story to its 300 plus pages. It spoke of the Parker family and its most famous son, Quanah Parker. Quanah grew up to be the most feared, intelligent, and prominent Comanche chief despite being half white and losing his family while he was still a young boy. He was inquisitive and fearless, two traits that would allow him to rise quickly as a warrior.

Quanah’s tribe was the last to be taken captive. The Army’s deliberate effort while using Comanche fighting techniques was what it took to eventually overcome Quanah and his band of warriors. Quanah, who was staunchly opposed to submitting to the white man, realized his tribe’s eventual doom and surprisingly accepted an offering of peace. During this time, this meant leaving the free life on the plains for suppression on an Indian reservation.

This was the most interesting part of the book and the lesson I found most inspiring.

Instead of succumbing to the life of mediocrity within the walls of the reservation, Quanah rose to be the only ruling chief of all Comanche Indians.

The title of ruling Comanche Chief was given to him by the government and Quanah was the first and last to hold this title. Quanah essentially became a politician and a really good one. He knew how to leverage his reputation and became famous through other people’s renditions of his fighting exploits. He himself never spoke of his past and only focused on the future of his tribe and worked vigorously to prosper in his new world.

Quanah would conquer this new world in the same way he did the vast plains of the West. He adopted his principles of success to suit a world of politics of business.

He would be immortalized as the last great Comanche chief but would also forever serve as an example of how one can reinvent themselves to remain successful in any situation.

You can use the link below to sample audiobooks like this one, which can be helpful for 300 plus page behemoths and long drives across wide-open plains.

5 Books that I Must Read
Very Good Lives by J.K. Rowling
The Lion by Christopher Walken
The Impact Theory Belief System