I kept hearing about Robert Greene’s note card system. Mostly from Ryan Holiday describing his own personal method, formulated during his time apprenticing under Robert Greene.

The more I heard about the system, the more I became obsessed with it.

The reason is that I am a master of collecting information. I can gather resources and stack the materials necessary to complete projects of unimaginable magnitude. I would consider myself world-class at this process. The problem that I often encounter is synthesizing that giant pile of crap.

How do I transform the information and data into a meaningful and actionable script?

The more I read about the note card system, the more I realize that it could work for me. It’s most basic premise is based on marginalia and contains bits of things that I already do. For example, I like to physically write things down. I use Evernote just like everyone else but if it really matters to me, I put it on paper.

Read More: The Art of Marginalia

It makes it matter more for me and Ryan Holiday will say in multiple different articles that it is the difference-maker for him and the system.

From his article on Thought Catalog:

“Yes. But I don’t want this to be easy. Writing them down by hand forces me to take my time and to go over everything again (taking notes on a Kindle is too easy and that’s the problem). Also being able to physically arrange stuff is crucial for getting the structure of your book or project right. I can move cards from one category to another. As I shuffle through the cards, I bump into stuff I had forgotten about, etc.”

And the often asked, how about Evernote?

“Maybe for you but not for me. If that’s what you want to use then go for it. But I think there is something irreplaceable about the physical aspect. Physical books, physical notecards, that’s the best in my opinion.”

HOW DOES IT WORK?

The premise is very simple but its execution takes discipline. When Greene sets out to write a book, he could finish with hundreds of note cards, each containing bits of information necessary to piece together the puzzle of a finished product.

♦ When you read something you like or hear something or think of something, write it down on a notecard.

♦ File the notecard according to an overarching theme or within a section of a bigger project (like a book).

♦ When you aggregate the cards under a theme, it will formulate the foundation for a bigger idea.

♦ Make the system a ritual and do it for everything that you find or like. The value in the system is that it builds upon itself. More note cards create more ideas which lead to more ideas. Each note card contributes to a bigger theme.

♦ Go back through the cards often as it will help to generate new ideas or reignite old ones. 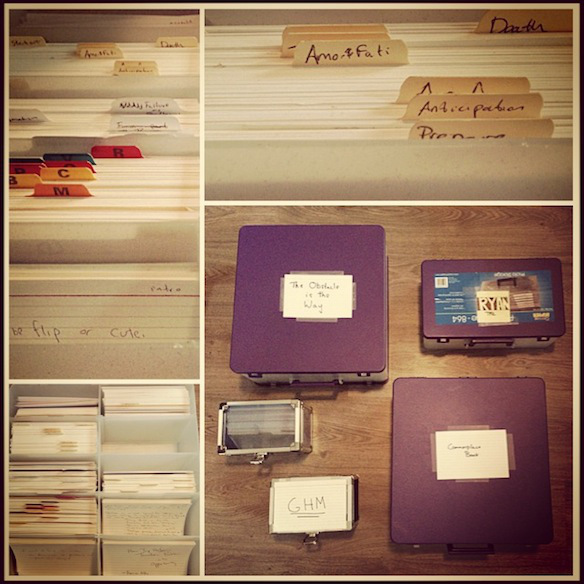 From Greene on his Mixergy interview: “Well, basically, I read a book and I take, as I’m reading it, I underline it and put notes on the side and then I go back and put them on notecards. And I can gauge a good book will generate 20 to 31 notecards. A bad book will generate two or three notecards and I will find themes in this book and I will take a book that’s maybe no organized very well and I will do the organizing. On page 30 you talk about this and you talk about it on page 180, you should have put those two together but I’m going to put those two together. And I find the themes in there and I break the book down into the gist of it, the heart of it. And, I categorize it later as I move into the process, I see these themes and patterns that you were talking about that an apprenticeship, creativity, working with a mentor, social intelligence. Slowly the chapters come to life and I’m now able to organize it in various chapters. Each part has the title of the book on it and is color-coded, have different colors of cards, depending on the kind of subject that I’m dealing with. If it’s the arts, science, politics, etc. It’s elaborate. You don’t want to know everything about it, but with this there now, if I’ve done all that work and I sit down to write, I have at my fingertips, all of this. If I want to do Leonardo da Vinci, I have 50 notecards that break him down from every possible angle. I can now, with that, write in a much fuller, deeper, dimensional way because I’ve taken all this information and I’ve organized it.”

From Greene’s Reddit AMA: “I read a book, very carefully, writing on the margins with all kinds of notes. A few weeks later I return to the book, and transfer my scribbles on to note cards each card representing an important theme in the book. For instance, in Mastery, the theme of mirror neurons. After going through several dozen books, I might have three hundred cards, and from those cards, I see patterns and themes that coalesce into hardcore chapters. I can then thumb through the cards and move them around at will. For many reasons I find this an incredible way to shape a book.”

We should be very aware of this practice, as Robert Greene is among my most revered authors.

He is responsible for multiple best-selling books. He admits that his brain is built for distilling large ideas and huge amounts of information; he says that he is built to write books. This coming after an unsuccessful stint in journalism and being told that he would never amount to anything as a writer.

If Greene uses this system to distill hundreds of books into a few nominal ideas that create the foundation of a best-selling book, then maybe I can use it to organize all of the informational fluff in my monkey brain.

A SYSTEM FOR PERSONAL SUCCESS

The value in the system is that it can be used to help archive large amounts of information. Ryan Holiday began his career by filing note cards into categories that were useful for his own personal success. He is now a recognized authority in many of those same categories:

There is value in a comprehensive system like this one.

I have hundreds of books on my to-read list and I want to ensure that I capture all of its most valuable pieces of information. 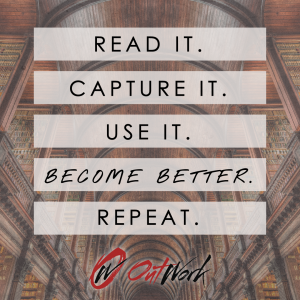 I want to ensure that everything I read becomes a stepping stone in which I can use to climb to new heights. Otherwise, what’s the point of reading all of these books. A pointless exercise in self-manipulation?

Read it. Capture it. Use it. Become better. Repeat.

One of the most important things I learned in college was to not accept things at face value. You have to look deeper than what you first observe, see, and feel.

College was mostly pointless after learning that one important lesson.

When reading, look deeper than most.

The Edge, Two Lessons & 12 Rules from Mark Cuban
Why Quality is Important
On Google's Culture: A Letter from the Founders
Outwork Book Club: The Millionaire Fastlane