In 1978, the San Francisco 49ers finished dead last in the NFC West Division with a paltry 2-14 record. The general manager of the time made a series of shaky decisions that did little to improve the outlook of the failing franchise. He shipped off key talent, including a QB that would go on to win two championships. He made a poor bet against the franchise’s future with a gamble on an over-the-hill O.J Simpson. In shambles, no one would have guessed that this same team would eventually become known as the “Team of the 80s.”

In 1979, the 49ers rise to football stardom would begin. Bill Walsh was hired on as Heach Coach and General Manager. 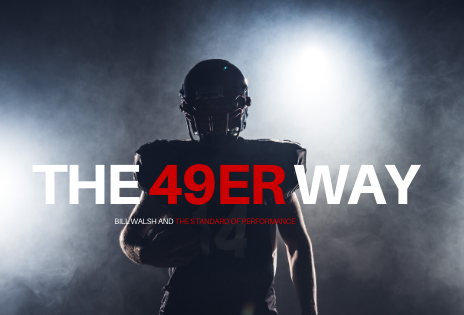 A Standard of Performance

What followed was the implementation of a series of organizational standards. Some of these changes were small ─ such as the tucking in of one’s shirttails. Seemingly inconsequential, the difference in tucking in or keeping out was the key to Walsh’s philosophy. To the newly minted head coach, the smallest details mattered the most.

These attitudes and actions, deemed by Walsh as The Standards of Performance, were meant to transform the identity of the organization.

My Standard of Performance applied to marketing, office personnel, and everyone else with the details applicable to their jobs, even to the extent of including specific instructions for receptionists on how to answer our telephones professionally.

Walsh provided instructions for not only what to do, but also how and why they did it. At the core of his philosophy was the idea that everyone and everything made an impact; nothing was too small to be considered. Excellence, according to Walsh, was in the details.

“My Standard of Performance ─ the values and beliefs within it ─ guided everything I did in my work at San Francisco and are defined as follows:

The Birth of a Dynasty

Walsh never talked about winning games. He focused on the process of becoming the type of team that wins games. When the standards of performance were applied, Walsh was certain, the score would take care of itself. A hundred wins and a handful of championships later, it did.

I directed our focus less to the prize of victory than to the process of improving ─ obsessing, perhaps, about the quality of our execution and the content of our thinking; that is, our actions and attitude.

After just a few months under Walsh’s leadership, things started to change for the 49ers. As the system took over, excellence started to manifest.

What followed was the beginning of a dynasty and perhaps the most inspirational turnaround in all of sports — a superbowl win in just his third year as head coach. With a new identity forged in the mastery of the process, the team would go on to win five total championships in a 20 year span of competitive success.

This unlikely transformation from near worst to best in class is a rare occurrence — not just in sports, but in all competitive endeavors.

The key is to focus on the process, to act like a champion before becoming one.

How to Develop a Process for Success

Walsh developed his Standard of Performance through many years of coaching football at all levels of competition. He was also mentored by other successful coaches who employed similar winning characteristics.

The most likely way to develop a process for success is to identify what works for those who are already successful in whatever industry/craft/trade/vocation you wish to excel at. What these high-performers do everyday are behaviors that can be dissected into actionable steps. Implementing these actions long enough to establish habits and routines is a tough task; if it were easy, everyone would abide by a standard of performance.

To help create momentum in building a process that works, Walsh provides some critical reference points (these points are meant for an organizational leader, but can be applied to any endeavor):

Creating a standard of performance and sticking to it is how winning occurs. It is how dynasties are built.

Every single day, every single action moves you closer to the type of person/organization you want to be.

Regardless of outcome, either dead last or super bowl champion, remember that it is the process that matters most.

Celebrate a win if you must. Reflect on a defeat for only a moment’s time, but return the next day with the same attitudes and beliefs.

Unfazed by the outcome, it is the 49er way.