It was a speech based on his personal experiences and one meant to inspire action in a nation that was quickly becoming soft.

Today, this speech would be even more prevalent. Although, he would most assuredly be trashed on social media by the SJWs of the world. He would be criticized for advocating war and he would be mocked for proposing a life filled with strife and effort.

I wish to preach, not the doctrine of ignoble ease, but the doctrine of the strenuous life, the life of toil and effort, of labor and strife; to preach that highest form of success which comes, not to the man who desires mere easy peace, but to the man who does not shrink from danger, from hardship, or from bitter toil, and who out of these wins the splendid ultimate triumph.

He talks about triumph. The great president was a winner, one that was always willing to outwork his competitors. He believed in the superiority of the nation and spoke uncompromisingly about what it takes to remain the best. He thought it necessary to always be prepared.

A concept that is so uncommon nowadays that preparation will easily give you an edge over anyone in any circumstance.

A life of slothful ease, a life of that peace which springs merely from lack either of desire or of power to strive after great things, is as little worthy of a nation as of an individual. I ask only that what every self-respecting American demands from himself and from his sons shall be demanded of the American nation as a whole. Who among you would teach your boys that ease, that peace, is to be the first consideration in their eyes—to be the ultimate goal after which they strive? 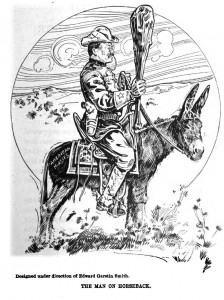 He believed in fighting. He argued that peace can only come when able-bodied men stand up and fight for it.

In this life, we get nothing save by effort.

We do not admire the man of timid peace. We admire the man who embodies victorious effort; the man who never wrongs his neighbor, who is prompt to help a friend, but who has those virile qualities necessary to win in the stern strife of actual life. It is hard to fail, but it is worse never to have tried to succeed. In this life we get nothing save by effort.

He believed that a life of ease was won by effort in the past. He argued that it is the responsibility of the person blessed with a life of ease to actively seek out a life of purpose and not just one of mere enjoyment.

A man can be freed from the necessity of work only by the fact that he or his fathers before him have worked to good purpose. If the freedom thus purchased is used aright, and the man still does actual work, though of a different kind, whether as a writer or a general, whether in the field of politics or in the field of exploration and adventure, he shows he deserves his good fortune. But if he treats this period of freedom from the need of actual labor as a period, not of preparation, but of mere enjoyment, even though perhaps not of vicious enjoyment, he shows that he is simply a cumberer of the earth’s surface, and he surely unfits himself to hold his own with his fellows if the need to do so should again arise. A mere life of ease is not in the end a very satisfactory life, and, above all, it is a life which ultimately unfits those who follow it for serious work in the world.

One that does not dare to be great is a “poor spirit” that has not truly experienced the ebbs and flows of life.

The thrill of victory and awe of defeat — these are powerful emotions that fully complete the human experience. Without it, life is fruitless.

Far better it is to dare mighty things, to win glorious triumphs, even though checkered by failure, than to take rank with those poor spirits who neither enjoy much nor suffer much, because they live in the gray twilight that knows not victory nor defeat… The timid man, the lazy man, the man who distrusts his country, the over-civilized man, who has lost the great fighting, masterful virtues, the ignorant man, and the man of dull mind, whose soul is incapable of feeling the mighty lift that thrills “stern men with empires in their brains.

How viable is this information today?

A society where men succumb to a life of ease — one without physical effort, protected by the habits of society and the cry of SJWs. So many people complain about their situation. They blame everything and everyone, expect handouts and only do enough “work” to live a life of mediocrity.

This is the same life of ease that we were warned to avoid.

I preach to you, then, my countrymen, that our country calls not for the life of ease but for the life of strenuous endeavor. The twentieth century looms before us big with the fate of many nations. If we stand idly by, if we seek merely swollen, slothful ease and ignoble peace, if we shrink from the hard contests where men must win at hazard of their lives and at the risk of all they hold dear, then the bolder and stronger peoples will pass us by, and will win for themselves the domination of the world.

If we shrink from hard contest where men must win at hazard of their lives and at the risk of all they hold dear, then the bolder and stronger peoples will pass us by, and will…

Win for themselves the Domination of the World.

How to Win Forever
The Iron by Henry Rollins
Kobe Bryant: Pay the Price
General George Washington on Being Bold