It was a stunning story to read.

How can one person endure 18 years of prison in some of the harshest conditions imaginable? First in a fledgling Russian system, then in a cutout ice cave at the edges of a banished Siberia.

The story is of Victor Herman. An American prisoner of Russia during the years of Stalin and WWII. He began as a boy with a relentless drive- one that would have earned him heroic fame had he remained in the US- who became a man within the walls a hopeless Russian prison system.

The conditions of his sentence were abysmal beyond belief. It was hard to imagine that anyone can survive the conditions that he endured.  A system that was purposely designed to eventually kill each of its inhabitants. The physical work was unrelenting and mind-numbing. Food was non-existent and the daily grind was made to drive a person to insanity.

Yet, he lived to tell his story of survival, perseverance, and endurance.

Herman survived because he always believed that he would. He built, in his mind, an unshakable sense of invincibility. One where he would systematically execute each and every task required of him. He pushed beyond his doubts. He didn’t ask questions. He just kept within him his belief in himself and did the work.

He focused solely on what he needed to get done in that moment to get to the next.

HE MAINTAINED THIS SINGULAR FOCUS ON SURVIVAL EVERY SINGLE DAY. 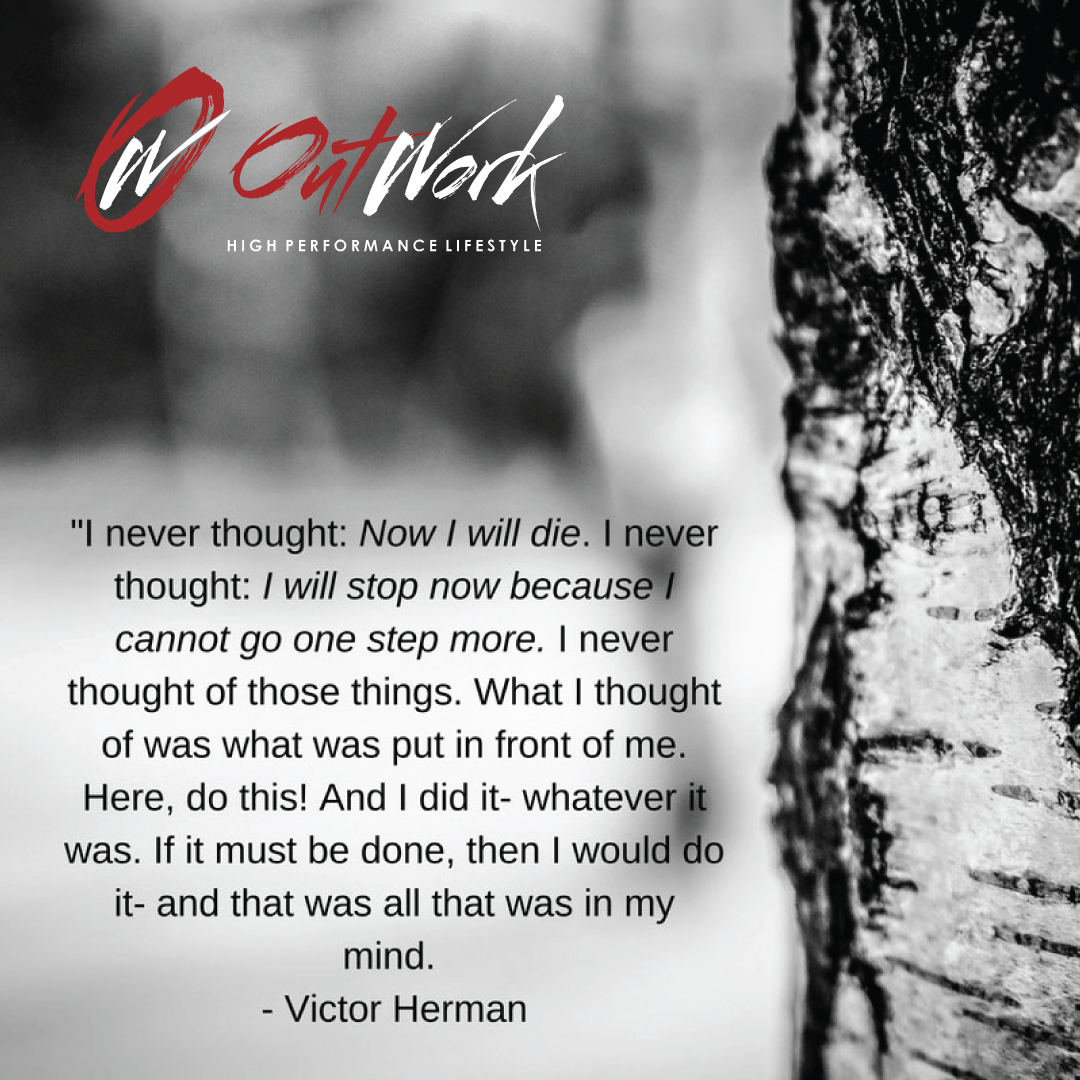 Herman recounts a story where 18 prisoners were led into the woods, each with their own prison guard in tow. The instructions were for each of them to cut and load logs onto a 60-ton railway car. The task called for each individual person to load a 60-ton railway, which meant the task was virtually impossible to complete.

Yet, for two straight days, Herman cut and loaded logs onto his railway car. No negative thoughts, no pity, just work.

They quit because the challenge was impossible. They chose death over effort.

It is important to note that Herman didn’t completely fill up his railway car. He strategically placed logs into the car so that it appeared to be full. He knew that completely filling up the car with no food and shelter would leave him too exhausted to finish the job.

Even in the most despairing of places, Herman used his mind to strategically attack the challenge.

I make note of this because what he did was eventually discovered and led to a punishment of solitary confinement for one year. For one entire year, he did not work or move or interact with anyone.

But in a similar fashion, Herman somehow survived that year but was left too weak to continue work. No work meant no food, the equivalent of a death sentence in a Russian prison camp.

What I thought of was what was put in front of me. Here, do this! And I did it- whatever it was. If it must be done, then I would do it- and that was all that was in my mind.

He devised a plan to trap and eat rats. The rats had grown fat from the daily consumption of human flesh. Herman devoured the meat, raw, every day for six months, regaining his physical strength and sense of mind. The price of survival was raw rat meat.

Eventually, Herman was moved out of the prisons and sent North to Siberia where he was banished and left for dead. Siberia is possibly the coldest place in the world, so much so that even the Russian people fear its intense chill.

Herman wrote about working in negative 76-degree weather with winds so intense that you could only walk with it. Walking into it was not even an option. He also spoke of warming the air that you inhaled in your mouth before swallowing.

These horrors that are so unimaginable, that I cannot even begin to picture in my mind what this must of been like.

But somehow, it gets worse.

Herman’s wife and daughter came to live with him through two full Siberian winters. Winters so cold that his daughter was not allowed to leave their cut out ice cave. Imagine raising an infant with nothing but the light of a fire, buried deep under ground amid a grueling Siberian winter.

The message remained the same for Herman: Perspective.

It was a horror that Herman dealt with in a way that he dealt with all of his realities; by doing whatever was necessary to survive. By working every single day with a single-minded and unshakable focus.

Relentless in his pursuit of survival, Herman’s story makes me cringe at the comfort of my existence.

The greatest gift that we have today is our unlimited access to knowledge and information. With it, we have answers to every question we could ever ask.

All of this information means nothing. People today lack the ability, drive, and determination to take action. Knowing is not enough. For Herman, action meant survival. For many, action means discomfort.

We have to learn to put things into perspective.

We need to focus on less. Perspective allows us to look back into history; to realize that our existence is one of comfort and excess. That we have too much of everything and that our quest for more is a pointless exercise designed to keep our primate minds and bodies distracted from what really matters.

Herman’s story helps to put perspective into what I do every day.

IT IS ALL ABOUT PERSPECTIVE

Cultivate an existence that is reflective of the history we know of and choose to ignore. Wake up every day with a positive outlook and an unshakable belief in your self.

Life is short, aim to make an impact. Be the best person that you can be and know that the collection of artifacts that you accumulate in your life means absolutely nothing. Aim to take action.

Tomorrow I will wake up in a temperature-controlled room. Fat from a feast. Haggard from the wine. Weak from the comfort. But also with a new perspective.

→ The book is out of publication, but there are a limited number of copies here.

→ His story was made into one of those weird 1980 documentaries here.

Like what you read? Place your email in the box below and I’M IN.